I get that politicians who represent districts that are dependent on coal mining and fossil fuels are trying to stall or block the transition from fossil fuels to renewable energy. After all, that transition brings with it the threat of voters losing their jobs. If the parliamentary majorities are tight, that means that a green energy transition becomes impossible because the politicians representing fossil fuel-dependent districts can block legislation. And that is why Joe Manchin, Democratic Senator from West Virginia, is the most powerful man in US politics right now.

But has anyone discussed the jobs Joe Manchin could create in his state by installing renewable energy factories there? Did anyone try to buy him off by promising investments in West Virginia including retraining for coal miners and guaranteed jobs in the newly established factories for wind or solar energy? Maybe they did and then resistance came up against this kind of industrial policy, which distorts free markets. But the number of jobs created by green energy is a multiple of those created by fossil fuels. 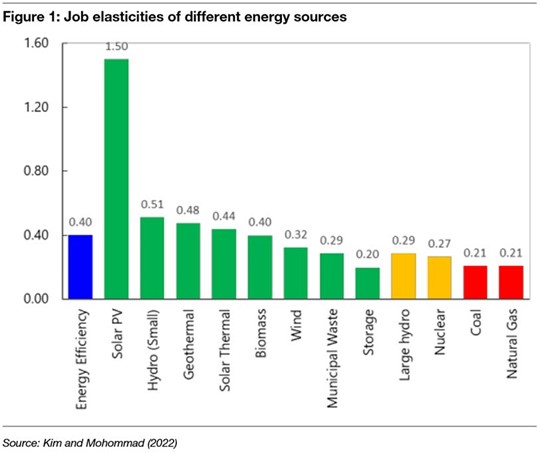 Switching from fossil fuels to renewable energy should be a no brainer – even if you don’t believe in climate change – because you end up with an electricity source that is cleaner and doesn’t pollute the air or water, thus keeping residents and their children away from harm. On top of it, it is cheaper than fossil fuels and it creates more jobs. Switching to renewable energy has nothing to do with fighting climate change or saving the planet. It is the rational thing to do even if all you are interested in is money and the bottom line.