But in the world of internet purchases, this social component is increasingly reduced to a couple of emails and phone calls. In many instances, particularly since the onset of the pandemic, buyers often don’t even know what the person they order from looks like. And this can leads to worse outcomes for both buyers and sellers.

A new study tried to assess the impact facial attractiveness has on the decisions of both buyers and sellers. When I read about that study, I first thought: “Here we go again. Another study that shows that attractive people are treated better than unattractive people.” But the results are more interesting than that.

The study asked participants in a lab experiment to take on the role of a wholeseller, or a retail customer of the wholeseller. First, the wholeseller was asked to quote a price for the goods to be sold. The retailer, once he or she has been quoted a price, is then asked to place an order choosing how many items to order. Depending on the experimental setup, either the retailer or the wholeseller or both would see the face of their counterparty in the transaction or they would not see a face at all. Furthermore, the faces shown to them were standardised and could be either attractive or unattractive, male or female. 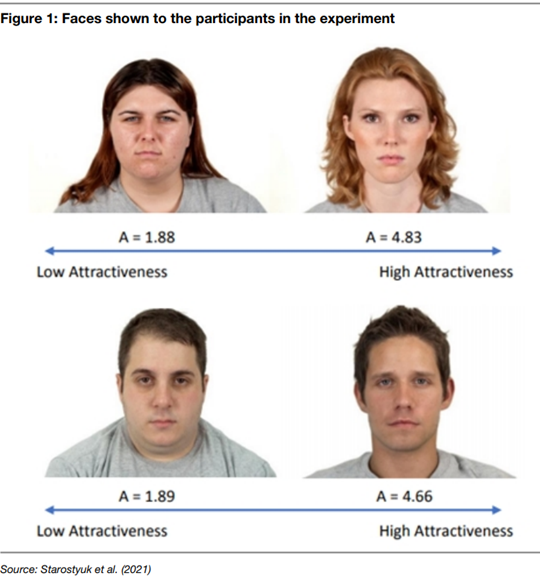 The first result, and probably the least surprising, was that in which people were shown the faces of their counterparts in the negotiation which gave significantly better conditions, that is the wholesellers were offering lower prices and the retailers ordered more items. We humans are social animals and dealing with a human (even if it is just a face on an email as in the experiment) makes us more socially minded and both sides in a trade get a better deal.

The experiment didn’t test for differences between faces shown in an email or on a screen or for personal interaction, but I am pretty sure that the work from home crowds do get a worse deal than the people who personally meet with their clients. Similarly, I am pretty sure that when it comes to promotions and other career benefits, the work from home crowds that are more remote and have fewer in-person interactions with their colleagues and bosses will get fewer promotions and lower bonuses. In any case, besides the obvious benefits of seeing someone’s face, there are also gender and attractiveness effects. First, women get a better deal, but that is not dependent on the attractiveness of a woman. Wholesellers offer a lower price to unattractive and attractive women alike and retailers order a larger quantity from women than they do from men.