But, thus far, nobody has really checked if and by how much narratives can influence the price of assets, for example. This is where Dor Morag and George Loewenstein come in. They recruited about 1,500 participants in total via Amazon MTurk and put them into the situation of an asset owner who is thinking about selling an asset. The assets in question in this case were taken from the original behavioural finance experiments that established the endowment effect: a mug or a hat.

To confirm the results, the experimenters conducted a second experiment with different participants and gave them a hat. But this time, some participants were told that they had received any old hat while others were told that they were given a hat that had personal significance for them. Then, in each of these two scenarios, some people were asked to write a list of attributes of the hat, while others were asked to write a story about the hat.

On average, over all the experiments, writing a story around the item they owned made them about two-thirds more likely to hold on to the asset at any price and increased the price they were willing to accept for the mug by between 25% and 80% depending on the circumstances. 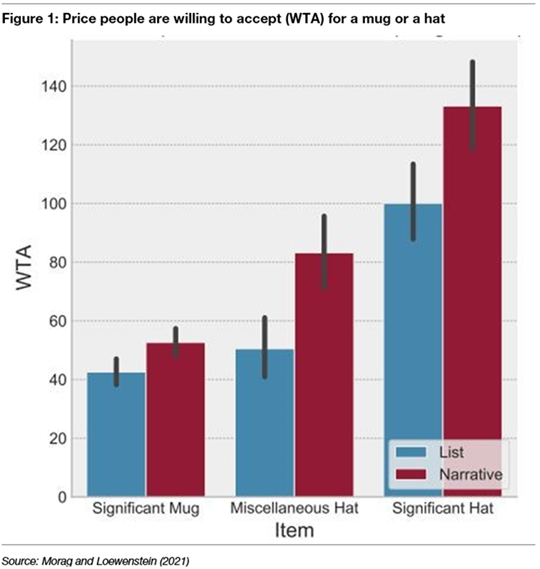 Now think of the high-flying stocks of the day. Almost all of them have a great story AND personal significance to many of their investors. Apple has a great story around a founder that revolutionised mobile phones and many investors probably have a personal connection to Apple products because they own an iPhone, an iPad or a Mac. Tesla has a charismatic founder who promised to revolutionise the world and some investors have probably had positive experiences with Tesla cars. Or take Amazon, which many of us use regularly and which might have some personal significance for many of us. Or Google, or Facebook, or Netflix, etc. but also think of Elizabeth Holmes, who created a fabulous story around a product of high personal significance to many people and that way turned the fraudulent Theranos into a multi-billion-dollar company.

In fact, there are great narratives to be had around all the FANG stocks and many of these companies have created products that are personally significant for a lot of investors. Given Morag and Loewenstein’s experiment, it shouldn’t come as a surprise that these stocks trade at higher valuations than most other stocks. Stories matter, and if a good story increases the value of a simple mug or a hat by 25% to 80%, then you can imagine what it does to stocks, houses, art, etc.