And you don’t need to wait until a bear market comes along to see who is passionate about markets. So many things can and do go wrong in investing that on an individual basis, things can go wrong for you but not others all the time. 2013 was my annus horribilis because I was long gold and short equities in a year when gold prices collapsed by 25% and the S&P 500 was up 25% over the same time. Not a good feeling, but by far not the only time I was wrong, just the most prominent one.

During such periods of disappointment, it is key to stay engaged and work on your performance, but this is when so many people who aren’t in it with their heart and soul tend to mentally check out or give up. And I don’t blame them. I had to learn to remain engaged myself over many years and even in 2013 when I had more than 10 years of professional experience as an investor, I got the occasional feeling of hopelessness. I had to force myself to change my approach to investing and learn from my mistakes. This learning process is hard. It takes something that not many people have: grit. Grit, or the ability to work hard and long towards a goal, is a vital ingredient if you want to be a successful investor.

In my case, the hard work was to admit my mistakes and learn how to change my investment process to not make the same mistake again. 2013 was the year when I started to take stop losses and momentum seriously because one thing that cost me a lot of performance was that I clung to my investment positions for too long despite the market going against me. Temperamentally, I was never inclined to follow simple momentum strategies. I was trained as a value investor and am a natural contrarian. Momentum investing or the use of stop losses are both antithetical to these investment approaches. It took a lot of hard work and frustration to change my investment process to include momentum and stop losses into it, but it eventually paid out. My performance has become much better since then.

But had I not been passionate about markets I might not have put in the hard work, but just stuck to my old ways. The next time I was sitting on a losing investment, I might not have cut my losses but let them run and this may have cost me dearly once again. And this is what grit does for you. It helps you not make the same mistake again and again but instead forces you to learn to cut your losses and move on.

Interestingly, this can be shown in lab experiments as William Bazley and his colleagues have done. They recruited a group of volunteers and split them into two groups. Half of all participants were randomly selected and asked to recall an instance in their life when they had to work hard to achieve something that they could be proud of. After this recall of a situation where they showed grit, they were asked to perform a few typical lab experiments to determine their disposition effect, i.e. their tendency to sell winners too soon and hold on to losing investments for too long. After the investment tasks were all done, they were asked to rate their personal grittiness to check if they were still in a mindset that was influenced by a notion of hard work.

Meanwhile, the other half of the participants did no exercise in recalling past episodes of grit but engaged right away in the investment tasks. 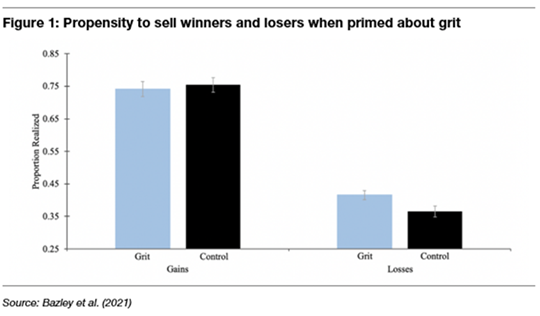 In other words, grit made them better investors by keeping them engaged in the face of adversity and avoiding bigger losses than necessary.