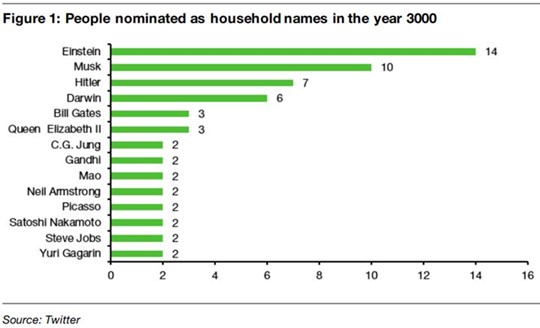 In October, Tim Urban launched a simple Twitter survey: “Who from our modern era (say 1800 – today) will be a household name in the year 3000?”. Below is my statistical analysis of the first 100 answers. I only show people that were named more than once.

I can believe that people like Einstein, Hitler or Darwin will be remembered in a thousand years, but Elon Musk? Bill Gates? Satoshi Nakamoto? I would call presence bias on these names.

In any case, Twitter surveys are supposed to entertain us, not to be taken seriously. On the more serious side, Joseph Risi and his colleagues have analysed if people really are able to detect important events in real time. To do that, they examined the diplomatic cables of the US Foreign Service between 1973 and 1979. These cables are classified in their importance by the diplomat sending them. This gives us an idea of how important the sender thought the events were at the time. At a later date, the US State Department collects the most important cables, transcripts and phone calls in the Foreign Relations of the United States (FRUS) publication. Out of the nearly 2 million cables sent between 1973 and 1979, only 1,723 (0.09%) made it into the official archives of the State Department.

So how successful were the diplomats at identifying important political events in real time? Well, if you look at each cable that was eventually selected in the FRUS publication, their hit ratio is high. Practically all of these cables were marked as of high importance at the time they were sent.

But that is not the exercise we are interested in. How likely is it that, if you select a random assortment of cables sent by diplomats, they will identify the most important ones as such? Here, the researchers gradually increased the list of cables from only the ones selected in FRUS, to more and more cables with the ratio of cables not included in the FRUS rising from 1 (all selected cables are included in the FRUS) to 50:1, 100:1 and eventually 1,132:1 (the last one saying that all diplomatic cables were examined).

In essence, the researchers increased the noise around the signal more and more. Then they measured how many cables would make it into the final document and the number of false positives (cables that were deemed important at the time but did not make it into the FRUS) and false negatives (cables that were deemed of lesser importance but made it into the FRUS). As you can see in the chart below, the more noise there is in the sample, the lower the likelihood that a truly important cable is recognised as such in real time and the more likely it is that we think an event will make it into the final record even though in hindsight it turns out to be irrelevant. 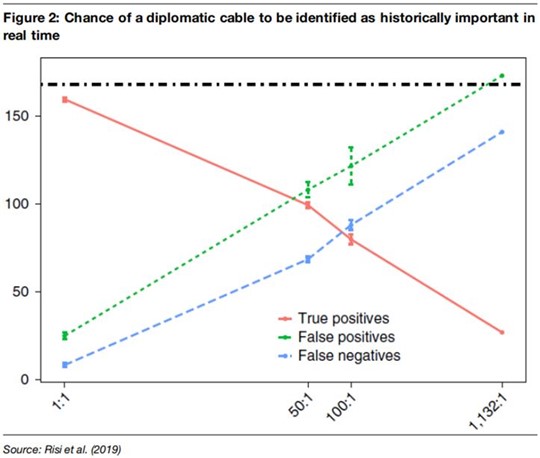 My conjecture is that the same is true in financial markets. We tend to think of the Covid pandemic and the financial crisis of 2008 as watershed moments that influenced markets not just at the time they were happening but are considered as extremely important years and decades later. I think the financial crisis of 2008, just like the Great Depression of the 1930s, is likely to qualify as such a watershed moment (mostly because we entered the zero interest rate policy world). But I am not so sure about the Covid pandemic. For one, remember that most of us had to look up the flu pandemic of 1918 to get an idea of what might happen in 2020. We had all but forgotten about that event, even though it was at the time far more important than the Covid pandemic was in 2020.

We may be sitting in a pub in the year 2050 or 2100 (well, you may be sitting at a pub in 2100, but I certainly won’t) and think of the Russian invasion of Ukraine as the start of World War III, as Niall Ferguson has prophesied. Or we may think of it in the same terms as we think of the civil war in Yugoslavia today, nothing more than a side note of global history. We may be sitting in the pub discussing how the year 2022 was the year central banks lost control over inflation and ushered in an era of 1970s-style stagflation. Or we may simply think of it as a short-term increase in inflation due to supply shocks like in 1947 or 1990. Who knows?

What I do know, however, is that as a forecaster and as an investor, it doesn’t pay to invest based on such extreme forecasts. The world always seems on the brink of some major catastrophe, yet, if you want to make money, the best way is to follow sensible, middle-of-the-road forecasts, just like politicians should follow centrist policies, not extreme, ideologically tainted, fantasy policies (I guess you know who this is addressed to…).

There is a reason why the second rule of my 10 rules of forecasting is called “Don’t make extreme forecasts”. After a year like 2022, people who make extreme forecasts that turned out to be correct are often heralded as sages and heroes. But they aren’t. Just think of Niall Ferguson, who has predicted the end of the world several times in the last 15 years. Or think of John Paulson who has been warning of rising inflation since 2008 and has been holding gold as an inflation hedge ever since. How did that work out for him (or his investors)? If you are interested in fame, by all means make extreme forecasts all the time and hope that one day, one of them will come true. But if you are in the business of making money, these people are the most dangerous people to pay attention to.

Thought of the Week - Christmas edition: Santa Claus is everywhere Previous article
Thought of the week - Juniorisation Next article