Imagine you work at a company and you hear the news that your firm may be subject to a takeover by a competitor or a private equity firm. How would you feel? Those of you who have been at the receiving end of such rumours know that most people will feel anxious and concerned they might lose their job. Others may start to look for another job right away. In any case, most people in the target firm will likely be distracted. And that means that their productivity at work declines. A group of German and American researchers investigated how much productivity drops in reaction to a takeover rumour. Based on their analysis of more than 10,000 takeover rumours in some 40 countries they found that in the six months after a rumour was spread by the press, sales per employee dipped by 1%. For the whole year that is a decline of total sales by 0.5% compared to companies that weren’t the subject of rumours. And it takes about 1 to 1.5 years for sales to recover to pre-rumour levels. It’s not nothing. 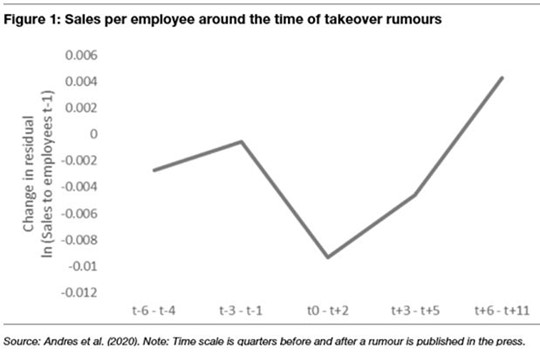 This is why laws like the UK takeover code of 2011 are helpful. The UK Takeover Code has the wonderful “put up or shut up” rule that forces an acquirer to publicly clarify its intention within 28 days. This dramatically limits the uncertainty in financial markets, but also in the target company and thus limits the damage done to its operations.