I think there are many explanations for why gold prices have been so weak this year. One of them, in my opinion, is that many of the libertarian, “central banks are going to print money until we get hyperinflation”-types have moved on to cryptocurrencies where they think they have a currency for the 21st century that cannot be influenced by governments and central banks. 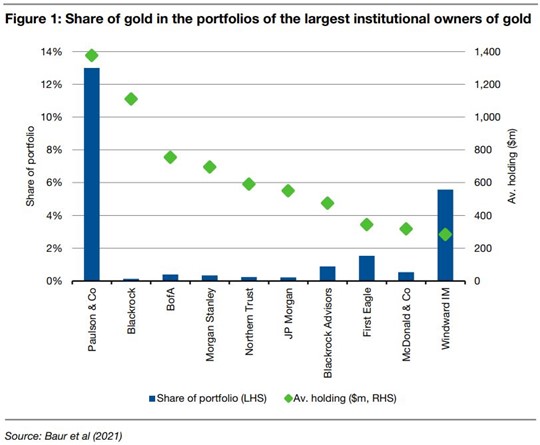 The problem is that, today, institutional investors still account for only 40% of total gold ETF holdings. After selling about a quarter of their holdings between 2011 and 2014, they bought again from 2014 to 2016 but only to pre-2011 levels. In most institutional portfolios, gold is either non-existent (e.g. Vanguard, DFA, Berkshire Hathaway) or such a small allocation that it scarcely warrants attention. The table below, taken from research by a group of Australian researchers, shows that the institutions that hold the largest amount of gold ETFs typically hold less than 1% of their AUM in gold. And in these cases, the gold holdings are part of a specialised portfolio or a dedicated gold fund. Unlike 10, 15 years ago, gold has become a sideshow again, as was the case throughout the 1980s and 1990s. And as long as that doesn’t change, there is little chance that gold will embark on another multiyear bull run.