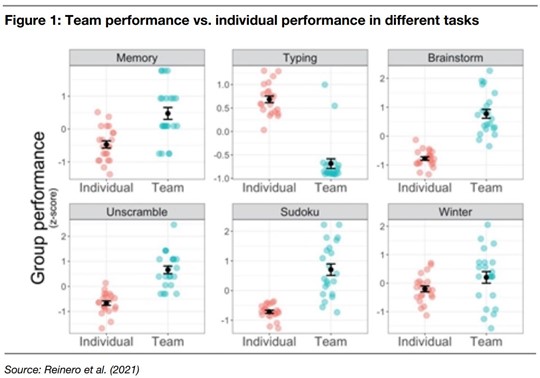 It shows that for most tasks, teams performed significantly better than individuals. The only exception was a typing exercise where individuals performed better because teams constantly had to look up to see where other team members were and wait for slower typists, which delayed the whole team. Teams don’t always perform better but for creative and complex tasks that aren’t well defined, they almost invariably produce better results.

And because our modern knowledge economy mostly deals with tasks that require creative solutions to difficult, ever-changing problems, businesses are constantly putting more emphasis on their employees’ ability to work in teams.

But how do you form an effective team? I have discussed previously that having star players in a team or individuals who are much better than everybody else doesn’t work. In fact, it may be counterproductive to the team’s performance. In Germany, there is a popular book called ‘Die Teamlüge’ (‘The team lie’ in English) which compiled lots of empirical evidence when teams are worse than individuals.

Teamwork isn’t a panacea, but if you can form effective teams, there is strong evidence that it improves outcomes in most complex tasks in today’s business environment. But how do you form an effective team? How did the researchers in the study above form the teams in their experiments?

It is instructive to note that the participants in these experiments were incentivised differently. In the individualistic setting, participants were told that their performance would be measured based on their individual contributions and that they were competing for a bonus pool against other individual participants. Hence, participants were incentivised individually and correspondingly behaved in an individualistic manner without much identification as a member of a team, though notionally, they were part of a team of workers trying to solve problems. If that sounds like your current work environment and the performance measurement system at your company, it’s no accident. The vast majority of businesses claim they are team-oriented, but then run incentive schemes that are based on the measurement of individual contributions. Every employer I ever had claimed that the bonus pool at the end of the year was not just defined by my own performance but also the performance of my team, and my division, but while personal performance indicators were clearly defined and measured monthly, the team performance and its weight in the overall bonus pool were never disclosed and never properly defined. But if you don’t know what the team’s performance is and how it can be influenced, you are not going to change your behaviour. What gets measured gets done, but unfortunately, almost all companies only measure individual performance.

To make up for the shortfall, companies then create team events and make employees participate in team-building exercises, which in my view are a waste of time and money because they have no permanent impact on the behaviour of individuals when they go back to a workplace and are confronted with individual targets.

Now compare this individual incentive scheme to the team incentive scheme where people were asked to name their team and the team was incentivised as a team with the bonus split up between different teams based on the team performance. Within each team, the team bonus was then split up evenly between all participants. Hence, it wasn’t about competing with other individuals in your team and outside your team. There was nothing to gain for an individual by outperforming other team members. On the other hand, there was also nothing to lose by underperforming and slacking off except that a team member who didn’t pull his or her own weight would drag the whole team down and face the social pressure from the other team members. And if you truly feel like a member of a team, then that peer pressure is enough to make you feel guilty and perform to the best of your abilities.

As a matter of fact, there is a way to measure whether team members truly feel part of a team (though one that is not practical in a business setting): effective teams show increasing coherence of their brainwaves. Measured by EEG, members of a team who strongly identified with the team showed increasing synchronisation of their brain activities. They were literally getting on the same wavelength.

And how do you do that? I doubt that a team incentive structure on its own will do the trick. But complement it with daily rituals that foster team building and you might get there. We know from effective sports teams that synchronised physical activities can be powerful tools to foster team spirit. Whether it is exercising together, dancing, or singing together, all these activities have been shown to foster a feeling of belonging with fellow participants. Getting into a huddle where you literally stick your heads together with your teammates and turn your back on everyone else is another technique to increase team cohesion. And having a team name, a team symbol, etc. all help as well.

In my view, business has a lot to learn from sports teams when it comes to building successful teams.