I have written about this, for example, here and here. 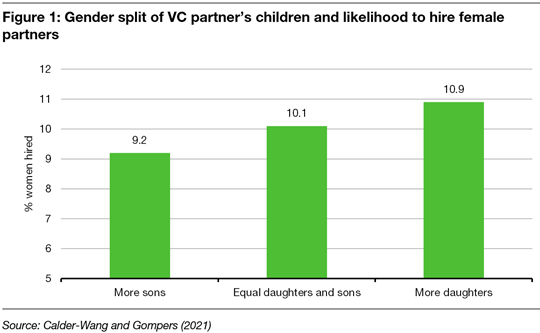 So, venture capital firms benefit from higher gender diversity. But the really interesting thing about the research from Calder-Wang and Gompers is their finding of what makes venture capital (VC) firms hire more women. Remember that the study covers the period from 1990 to 2016 when diversity wasn’t really a topic on most people’s radar and there were no external pressures on partners in VC firms to hire more women. It turns out the key driver for VC firms to hire more women were the daughters of the partners. If senior partners in VC firms had daughters, they were more likely to hire women as partners for their firms. That effect aggregates and VC firms with more daughters than sons among the partners were overall more likely to hire women as partners. The personal experience in their homes of what daughters are capable of doing made partners more amenable to the idea of hiring female partners to work with them … which in turn made their firms more successful in the long run.