We are all enthralled by the most successful people in the world. Jeff Bezos and Bill Gates are an inspiration to many aspiring business leaders and Elon Musk has become a “rock star” thanks to both his enormous business success and his personal antics. In the investment world, we look up to all time legends like Warren Buffet as well as star fund managers with a string of good returns like Cathie Wood in 2020. But Cathie Woods’ spectacular fall from grace already indicates that not everyone who becomes a media darling for their extreme success does so because of their skill. 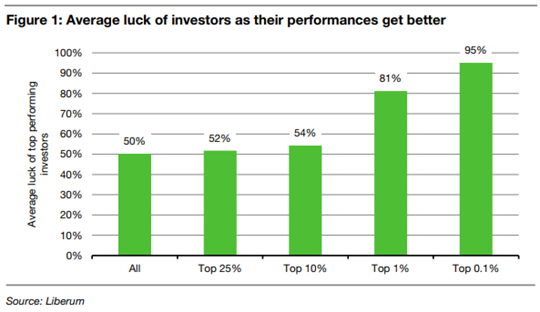 We all know that the performance of investors and business leaders alike is a combination of both skill and luck. But most people don’t realise that even if luck plays a minor role in general, it dominates at the extremes of the distribution.

To see how this works, I have simulated 10,000 investors (or business executives). I have simulated them as having skill for their chosen profession which is randomly distributed between 0% and 100%. At the same time, these fund managers are more or less lucky, with their luck also randomly distributed between 0% and 100%. Their total success is driven 95% by skill and just 5% by luck.

One would think that if luck plays such a minor role, becoming a top investor is mostly going to be a matter of skill, but one would be wrong. And here is the average luck score (i.e., how lucky the investors got) as you move from average to better and better performing investors. 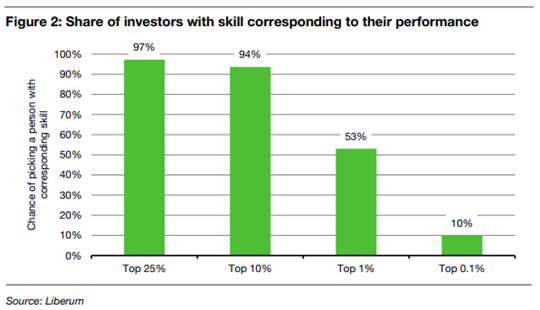 That also means if you follow the common approach of looking at what the most successful investors or business leaders are doing, you are incredibly likely to follow lesser skilled individuals. The chart below inverts the process and looks at the likelihood that anyone ending up in the top 25%, etc. really has skill in the top 25%, etc. Among the top quartile investors, in our simple model, 97% of the investors with top quartile performance have top quartile skill. 94% of top 10% performers have top 10% skill. Bot only half of the top 1% performers truly have top 1% skill and out of the top 0.1% performers, only 1 in 10 truly has top 0.1% skill. 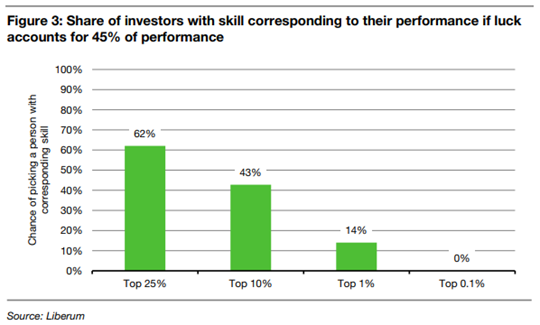 And the numbers above are based on a model where skill is responsible for 95% of success. In real life (at least in the investment world) I suspect, luck plays a much larger role, somewhere close to 50%. The chart below shows the share of investors with skill corresponding to their performance if skill accounts for 55% of total performance and luck for 45%. Only six out of 10 top quartile managers truly have top quartile skills. And only one out of seven Thought of the Day 23 June 2022 3 top 1% investors truly have top 1% skills. Oh, and on average none of the top 0.1% investors have top 0.1% skills. They are all there because they have been very lucky indeed.