Nowhere is this reaction more dangerous than in the high-stakes of M&A arena. The sums involved are large, and the impact on a company’s fortunes equally so. Yet, because these are events that often attract a lot of media attention, the temptation to outdo your peers can be extremely high for some CEOs. So, instead of acquiring smaller companies that may be a better fit with an existing business and can more easily be integrated into the existing corporate structure (and adopt the existing corporate culture), some CEOs are going for fewer but larger mergers and acquisitions deals. That might end well, just as sometimes a drunk at a bar says ‘hold my beer’ and then actually does perform some amazing feat.

But usually, giving a CEO a lot of cash to spend on M&A is like giving a drunk a barrel of beer. You know exactly what is going to happen, you just don’t know which wall he is going to hit.

By pursuing these larger takeovers, these CEOs may stroke their egos but create costs for shareholders because the share price reacts much less favourably to large takeover bids than to smaller ones. On the day of the announcement, the large takeovers on average lead to an abnormal share-price increase of 0.6%, while the smaller takeovers lead to an abnormal share-price increase of 2.7%. And because the CEOs who acquire larger targets do so less often than the CEOs who acquire smaller firms, this effect accumulates over time and leads to a better share-price performance for companies that make smaller, less costly acquisitions.

So, who are these CEOs that go for fewer but larger acquisitions? How can we identify them as investors? And how can the directors of a company identify them in order to limit their acquisition budgets to avoid destroying shareholder value? 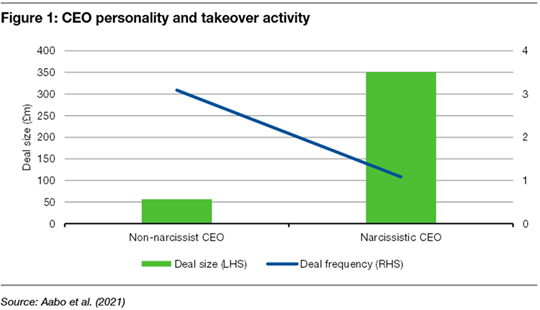 In the above-mentioned study, the CEOs that went big were the ones that showed more signs of narcissistic behaviour. And while the study measured narcissism in different ways, all of which had similar outcomes, one easy way to measure it is to listen to the CEOs during earnings calls (or rather, analyse the transcripts of these calls). Narcissistic CEOs use more personal pronouns that point to themselves, such as “I”, “my”, “mine” than collective pronouns that point to a group or to other people. The higher the ratio of first-person personal pronouns to collective pronouns, the more likely it is that a CEO will try to engage in ridiculous outsized acquisitions that will lead to lower shareholder value.