Google and Facebook command more than 50% of global digital ad spending, though Alibaba and Tencent are catching up. One of the key attractions of Google and Facebook is that advertisers can execute targeted campaigns at scale by utilising first-party data to target customers by interests, etc. So, in theory, digital advertising should be more effective than traditional TV or print advertising.

Every investor, CFO and CEO is trained to think of investments in terms of value for money, or simply return on investment (ROI). If you ask advertising agencies and advertisers, they may tell you that simple online ads are cheap but ineffective, because hardly anyone notices them or clicks on the link to the product or company, or spend may be lost to ad fraud (an impression charged, but not registered to a human). Advertising on social media is more effective, because it can be targeted. Print ads and newspapers are even more effective because, while, it is harder to target a specific audience, they have a much more committed readership, and thus can serve contextually relevant adverts based on data of the consumption habits of their typical reader. But that advantage, according to ad agencies and advertisers is limited.

Meanwhile, if you actually measure the ROI for ads in real life (in terms of money spend vs. revenue created), the picture changes substantially. The chart below uses data from my Liberum colleague Harry Read to show the relative increase in ROI in the eyes of advertisers and ad agencies (blue) and the true increase in ROI (green). On the one hand, advertisers systematically underestimate the ROI of ads, but they underestimate the ROI of print and TV ads far more than pure play digital ads or social media ads. 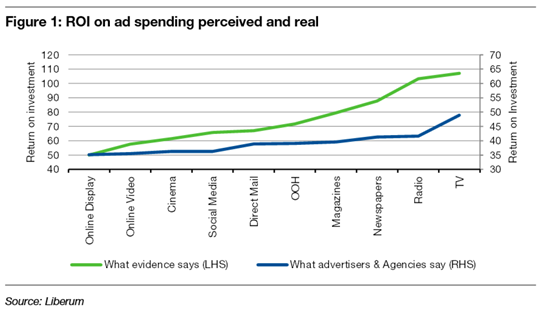 Because advertisers and ad agencies think that print and TV ads are only a little more effective in terms of ROI than digital or social media ads, they are directing most of their ad spend to digital. Instead, the chart shows me that they would, on average, be better off spending more on print and TV ads, which have a higher return; and though they are seemingly more expensive, they are far more effective. In investment terms, print and TV ads are better value than digital ads, and smart CEOs, CFOs and marketing officers should think about redirecting their ad spend away from digital and back to good old-fashioned print and TV.