But too many central bankers seem to be unable to make that differentiation, although there is increasing realisation among policymakers that they are unable to fight the current inflationary shock with monetary policy. Yet they are adamant in hiking rates fast. And that might create a recession.

But in a recession, not only would we see central bankers slash interest rates again, but we might also see calls for new fiscal stimulus through tax breaks or government support for working class families and the unemployed. The problem may be that – compared to previous recessions – such government support might be less effective. Mario di Serio and his colleagues have examined the fiscal multiplier of fiscal stimulus in 10 Eurozone countries and differentiated between supply-driven recessions – created by high inflation – and demand-driven recessions – created by waning demand – leading to low inflation. Now, because this is a study of Eurozone countries, there is a bit of a caveat. In the past decade, the Eurozone has been so different from the US or the UK, that I am not sure if all the results for the Eurozone hold there as well. But, at least qualitatively, the study can give us an indication of the problems governments may face in stimulating the economy in the next recession.
​ 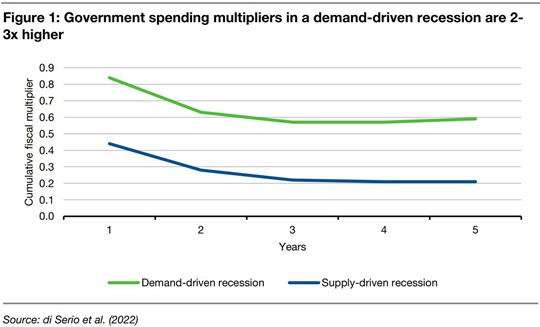 Thought of the Week features investment-related and economics-related musings that don’t necessarily have anything to do with current markets. They are designed to take a step back and think about the world a little bit differently. Feel free to share these thoughts with your colleagues whenever you find them interesting. If you have colleagues who would like to receive this publication please ask them to send an email to joachim.klement@liberum.com. This publication is free for everyone.​